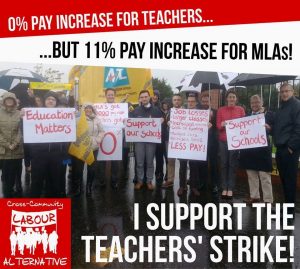 Labour Alternative gives its full support to teachers in the INTO striking for a pay rise on 18th January. While MLA salaries continue to rise, teachers here have seen their real pay fall by 15% over the last six years and are paid 16% less than the average in developed countries. This is a result of the policies of the Tories, the NI Executive and successive Education Ministers from both Sinn Féin and the DUP.

It is obscene that working people are told by Education Minister Peter Weir that there is “no more money” available when £490 million stands to go up in smoke through the botched RHI scheme, overwhelmingly benefitting wealthy bosses and landowners. All the main parties support a cut in corporation tax that will be like an RHI scandal every year, transferring hundreds of millions from public services to the profit margins of big business.

The fact that teachers in the NASUWT and INTO have voted to strike and their colleagues in the UTU have also backed industrial action speaks volumes about the depth of anger that exists. Teachers care passionately about the education of children and young people and do not take this decision lightly. Defending teachers’ pay and conditions is a vital part of defending the education system as a whole, which is being subjected to death by a thousand cuts by the Stormont politicians. We call on the leaderships of the teaching unions to work together and co-ordinate united action so it can have the biggest impact possible.

The upcoming election presents an opportunity to demand real change from the austerity and sectarian bickering of the Stormont establishment. Labour Alternative is standing a cross-community slate of candidates who are resolutely opposed to cuts in education or any public services, demand free education, a living wage for all workers and the scrapping of anti-union laws. Workers and young people from all communities must unite to fight for a society run in the interests of people, not profit.