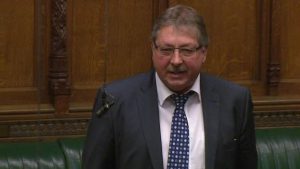 Labour Alternative representative Conor Sheridan has hit out at East Antrim MP Sammy Wilson’s comments about HIV in response to a constituent’s request that he back World AIDS Day.

“Sammy Wilson has implied that people suffering from HIV are somehow less worthy of sympathy and treatment because they likely contracted it as a result of ‘lifestyle choices’. This cold attitude mirrors the Victorian concept of the deserving and undeserving poor. Many of the diseases which cause the most deaths in Northern Ireland can be linked to lifestyle factors such as poor diet, smoking and alcohol consumption. I hope Mr Wilson would not dismiss the sufferers of these illnesses in the same haughty way.”

“On a global scale, HIV affects millions of people. While the numbers in Northern Ireland remain relatively small, diagnoses are increasing rapidly here while they are falling in the rest of the UK. In part, this reflects an ongoing stigma around HIV and those who are diagnosed with it. In order to prevent the spread of the disease, we need an informed, rational and caring public discussion, as well as better sex education and investment in sexual health services.”

“The fact that Stormont Health Committee member Trevor Clarke was, until recently, unaware that heterosexual people could contract HIV speaks volumes about the myths and misinformation which exist about this illness. Comments like Sammy Wilson’s only serve to add to the stigma surrounding HIV and make it more difficult to combat.”