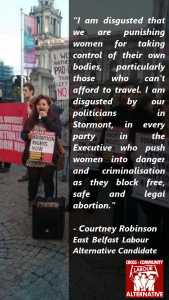 Northern Ireland’s abortion laws have once again been exposed as outdated and barbaric. A young woman has pleaded guilty to charges brought under legislation that is 150 years old. She has now received a three month suspended sentence. This comes after a High Court ruling which said that our abortion laws are incompatible with human rights.

Courtney Robinson, Cross Community Labour Alternative spokesperson and candidate for East Belfast said:
“This case has highlighted the situation faced by women in Northern Ireland. Every year over 1000 women travel to England to have a termination. Many more order abortion pills online. These tablets are on the WHO list of essential medicines but are illegal here if taken to have a miscarriage. It is only due to the backwardness of our politicians that women are forced to travel or act illegally. I am disgusted that we are punishing women for taking control of their own bodies, particularly those who can’t afford to travel. I am disgusted by our politicians in Stormont, in every party in the Executive who push women into danger and criminalisation as they block free, safe and legal abortion.”
“This court ruling is a blow to women and those fighting for women to be able to control their own bodies. It shows that we can’t sit back and hope the courts will change things for us. Instead, we need to step up our efforts to force Stormont to change the laws. We call on the Executive to take emergency action to end the criminalisation of women. Unfortunately, we know that politicians will only do this if they are put under pressure from ordinary people.