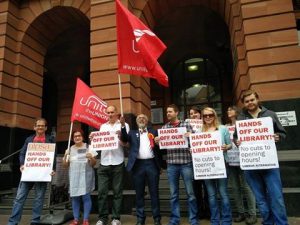 The Hands Off Our Libraries campaign is celebrating victory today after Minister for Communities Paul Givan announced that extra funds have been found to prevent cuts to opening hours at fourteen branches.

The campaign organised a day of action on Saturday 25th June, supported by Unite the Union, which saw protests and campaigning at all the libraries under threat. The campaign also picketed Minister Givan’s constituency office in Lisburn and delivered thousands of petitions against the cuts to the Department of Communities.
Campaign spokesperson Sean Burns said:
“This is a significant U-turn on the part of the Minister, under pressure from community activism. We have halted the ‘death by a thousand cuts’ to which our libraries have been subjected by successive administrations, both at Stormont and Westminster. We can’t be complacent going forw
ard, but this an important victory for the communities which would have been effected by further cuts to these vital services.”
“Like the recent reversal of plans to close day centres for people with mental health problems and learning difficulties in Belfast, this is an excellent example of what can be achieved when people organise to resist cuts, alongside the trade union movement. This victory should give confidence to communities and to working people that it is possible to resist austerity and demand that people’s needs are put before the profits of the bankers and big business.”
The Hands Off Our Libraries Campaign was initiated by Labour Alternative and backed by various local trade union councils and anti-austerity groups.