The RHI scandal could see £490 million go up in smoke while 42% live in fuel poverty, welfare is being cut and teachers are being told there is no money for a payrise. The DUP’s fingerprints are all over this mess but all five main parties bear responsibility. They endo 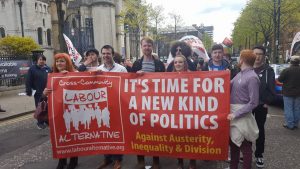 rsed the scheme in the Assembly Executive and they’ve known about the size of the financial black hole since early last year but it was left to a whistleblower to bring it to the public’s attention. This debacle was born out of the culture at Stormont of throwing handouts at big business. The main parties are united in supporting a cut to corporation tax which will be like an RHI scandal every year, transferring hundreds of millions from public services already in crisis to companies’ profit margins.

A matter of weeks ago, the DUP and Sinn Féin were bosom buddies, happily working together to implement cuts. Now, they and the other Orange and Green parties are engaged in a sectarian pantomime, cynically banging the drum on the divisive issues in order to secure their vote. While Sinn Féin are posturing as the champions of rights and equality, neither they nor any of the main parties support a woman’s right to choose, despite the wishes of a clear majority for a complete overhaul of our backward abortion laws. We are calling on ordinary people in all communities – including the 45% who didn’t vote last time round – to use this election to demand real change from the dead-end politics of sectarianism, inequality and austerity.

Workers, young people, the poor and marginalised must come together around our common interests and reject the Punch & Judy show that has dominated Stormont to date. Labour Alternative will stand a slate of candidates from across the sectarian divide – trade unionists, community activists and campaigners for LGBT and women’s rights who are committed to fighting for a better future for ordinary people. The trade union and labour movement has a key role to play in uniting working class people to fight for our rights and challenge sectarianism. We will be working with others to ensure the strongest possible labour movement challenge to the Stormont establishment is presented at this election.