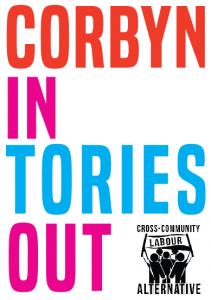 “Labour Alternative sends its support and solidarity to Jeremy Corbyn and those fighting to defend his leadership of the British Labour Party. The Blairites who are attempting to unseat him are Red Tories who represent the interests of big business and the 1%. They want a return to the discredited politics of austerity, privatisation and war.”

“Corbyn’s opponents have shown an arrogant disregard for the mandate he received from over a quarter of a million members and supporters of the Labour Party less than a year ago, even trying to keep him off the ballot paper this time around. Their plan to undemocratically disbar new members from participating in the upcoming leadership election demonstrates their lack of confidence that they can win in a fair and open contest.”

Courtney Robinson – who contested East Belfast for the party in the Assembly election – added:

“Since Jeremy Corbyn entered the race for the Labour leadership last year, the party’s membership has more than doubled, increasing to over 2,300 here. His anti-austerity, left-wing message and his call for “a new kind of politics” have created a wave of enthusiasm not seen in British politics in decades. His opponents don’t fear he will lose the next general election. They fear he will win, and would rather see the Tories in power than a Labour government under his leadership.”

“We call on all members of the Labour Party and affiliated trade unions to use their vote to support Corbyn’s leadership and deal another defeat to the Blairite wreckers. We disagree with Corbyn on some issues, including the one-sided statements he has made in the past with regard to Northern Ireland. But this is not about one individual – it is about building a movement for radical change in the interests of the 99%.”

“There is an urgent need for a cross-community, anti-austerity and pro-equality voice to unite workers and young people here. Labour Alternative was initiated by socialists and trade unionists to take a positive step in that direction. We will continue to work constructively with others, including members of the British Labour Party, to build such a political alternative in the coming period.”

Labour Alternative stood for the first time in the recent Assembly elections. Its young candidates received the highest votes for labour movement representatives in those constituencies in decades.