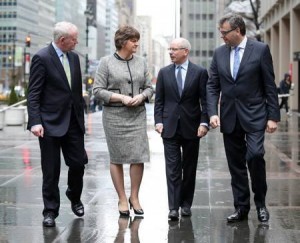 We are told that Arlene Foster and Martin McGuiness’s St. Patrick ’s Day junket  will create new jobs for NI. In reality it is more about selling off the future of my generation.

The key purpose is to promote the DUP and Sinn Fein’s plans to cut corporation tax by 2018. This will have the effect of taking £300 million out of our public services- meaning less money for public sector jobs. In effect what the assembly parties are doing is out-torying the tories by pushing for these extra cuts.

Nor has plans to cut corporation tax stopped multinationals like Gallagher’s and Michelin from closing their factories here. Any jobs that they will get will be low paid, anti-union jobs which will not replace the public sector and manufacturing jobs we are now losing.

The visit has even been opened with a business breakfast in New York hosted by KPMG. A company which have been involved in tax evasion scandals and has acted as administers for companies such as Visteon who denied workers basic redundancy and pension rights.

This is sadly the best politicians have to offer our generation. We need a radically different approach. We need significant public investment in order to create jobs for my generation. Rather than politicians, cutting jobs throughout the year and going with a begging bowl to America every St. Patrick’s day.