Courtney, born in the year of the Good Friday Agreement, condemns attack 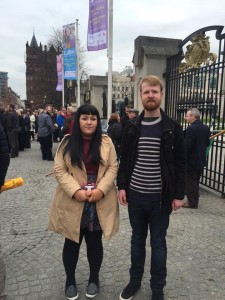 “I am saddened to hear of the tragic death of Adrian Ismay. The dissident republicans responsible for this disgusting attack have nothing to offer the people of Northern Ireland. They are intentionally stoking the flames of sectarian division. It is vital that we send a strong message of condemnation of this attack and let those behind it know we will not be dragged back into conflict. No groups or individuals should carry out ‘retaliation’ for this heinous act. Instead, ordinary people – Protestant and Catholic – must stand together against attempts to drag our communities back to the days of tit-for-tat killings.”

“I was born in the year the Good Friday Agreement was signed. Eighteen years on, we still face deeply ingrained sectarian division. The number of ‘peace walls’ has doubled during my lifetime. There has been no peace dividend for working class communities. New figures suggest one in five people here are in poverty. On the last full day of Stormont’s sitting before the Assembly election, this death reminds us of the failure of the main Stormont parties to move our society forward. Politicians and parties which base themselves on sectarian division cannot overcome it. Nor can those that implement cuts and impoverish working class communities. We need a new kind of politics and a new political force that unites workers and young people to build a better future for all.”

UPDATE: Courtney and Seán attended the ICTU vigil i
n response to the attack on 22nd March