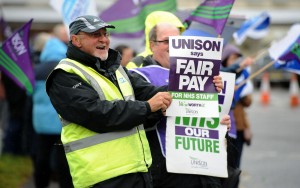 “Simon Hamilton’s imposition of a 1% pay increase is an insult to health workers. In reality, this amounts to a pay cut when the increased cost of living, changes to national insurance and pension contributions are factored in.”

“The Health Minister writing in the Belfast Telegraph said that health workers deserve this pay increase. This is patronising in the extreme. Why is it that workers in health only “deserve” a 1% pay rise when MLAs got an 11% increase last year?”

“From the DUP to Sinn Féin, the politicians are congratulating themselves for giving our health workers this measly increase. Yet these same politicians agreed to slash thousands of public sector jobs while cutting corporation tax for the fat cats. We need real change, not spare change and we will have to fight for it. I welcome the decision of Unison to reject this insulting pay settlement and believe we need a united campaign against Stormont’s austerity policies.”