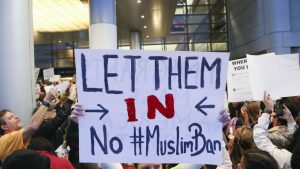 Spokesperson Courtney Robinson said:
“People across the world are rightly outraged by Trump’s blatantly racist and Islamophobic travel ban. We stand in solidarity with the thousands who protested at airports across the US demanding refuge for those fleeing war and oppression and opposing racist immigration policies. These demonstrations – and the strike action by New York taxi drivers – helped win a temporary block on some of Trump’s plans.”
“This threat to refugees and Muslim travellers remains on the table, however. Our local politicians should not legitimise this attack on human rights by shaking Trump’s hand at the White House on Saint Patrick’s Day. Both the DUP and Sinn Féin have had connections with Trump in the past but a ‘business as usual’ approach is not good enough. Some of the main parties make much of their commitment to equality – if that means anything, they should boycott meetings with this right-wing megalomaniac.”
“Stormont politicians’ regular junkets to the US have delivered next to nothing for ordinary people here – a few more low-paid call centre jobs while they are making thousands redundant in the public sector. On behalf of the people of Northern Ireland, they must forego the prestige of the annual trip to Washington and send a clear message that this kind of racist discrimination will not be tolerated, at home or abroad.”